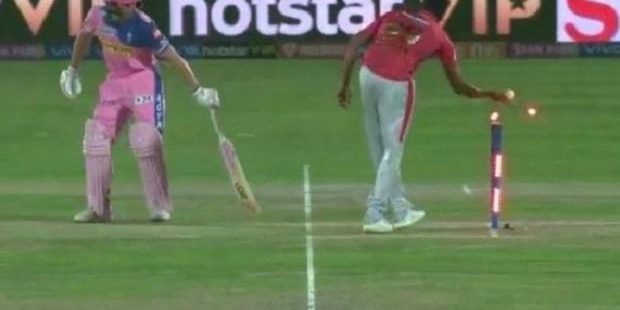 “IF THE NON-STRIKER IS OUT OF HIS GROUND AT ANY TIME FROM THE MOMENT THE BALL COMES INTO PLAY UNTIL THE INSTANCE WHEN THE BOWLER WOULD NORMALLY HAVE BEEN EXPECTED TO RELEASE THE BALL, THE NON STRIKER IS LIABLE TO BE RUN OUT, IN THESE CIRCUMSTANCES THE NON STRIKER WILL HAVE TO LEAVE THE PITCH IF HE IS CAUGHT BEING OUT OF HIS GROUND BY THE THIRD UMPIRE WHEN HIS WICKET IS PUT DOWN BY THE BOWLER.”

This method of dismissing a batsman was named after Vinod Mankad who for the first time used this method and has often been categorized as unlawful but if the batsman has walked out of his ground before the ball is bowled it is an attempt to gain unfair advantage of covering lesser ground to complete a full run. Therefore the bowler is fully entitled to run the batsman out if he has left the crease before the normal release of the ball.

Mankading became a huge issue to debate upon last year in the IPL when Rajasthan Royals were playing the Kings XI Punjab and Ravichandran Ashwin made an attempt to Mankad Jos Buttler and got him out. A Mankad again took place in the U-19 world cup match played between Pakistan and Afghanistan which raised a question again. Usually, we have seen the batsman complain and accusing the bowler of conducting such an easy action to dismiss him but it is the non-striker himself who is to be blamed because by doing that he is taking undue advantage of the length of the pitch.

Should the batsman be warned before being given out? I would say NO because the batsman has a dedicated zone which he needs to remain in but if he crosses the line and is run out from behind there is no requirement fo any warning. Just like if the bowler crosses the crease while bowling he is not given any warning but surely given a no-ball without any questions asked.