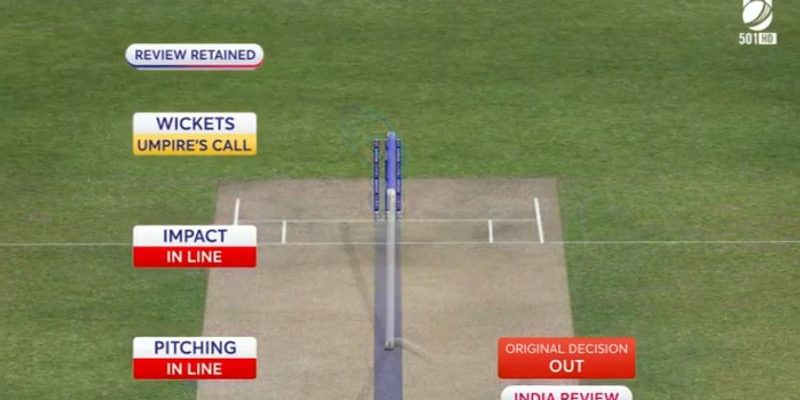 When a team is not convinced by the decision made by the on-field umpire, only then does the team go on to challenge that decision with the help of technology and a third umpire. Now, there are two instances where the umpires call comes into play. The first one is the height at which the ball hits the stump. As per the current rule, 50 percent of the ball should be hitting at least one of the three stumps for the batsman to be given out. If not, it is given as the umpires call to decide. The fact remains that even if the ball tracking shows the ball clipping the tip of the stump, the bails will fall. The point is that even after using the latest technology for review, if the decision has to come back to the on-field umpire, it may be best to scrap the decision review system (DRS) altogether.

The second instance is when a ball is pitching in line of the three stumps, and the impact is in line and the ball is hitting the stump – only then is a batsman given out.  When there is a clear cut line between the 22 yards for an LBW decision to be made, the ball is either in line or not in line. Despite conclusive evidence, if we cannot make a firm decision, then using all this technology seems futile.

For example, the left-arm spinner, Axar Patel, had the ball for the last over of Day 3 when bowling to Joe Root , who was caught off-guard. While the Indian team appealed for a caught-behind, umpire Nitin Patel gave it a not-out. The Indian team took the DRS but there was no bat involved as suggested by slow-motion replays. However, Root was stuck in his back pad and certainly looked plumb. The ball tracker showed that the ball was hitting the stumps but the impact was just outside the off-stump and hence, the third umpire had to stick to the on-field call of not-out.

Based on these points, I certainly feel an umpires call is causing a lot of debate and is hampering crucial decisions made, leading to critically indecisive decisions for one of the two competing teams and needs to be relooked at seriously. A properly thought out decision of the batsman being out or not out needs to be given after careful reviewing.

A soft signal is given by the on-field umpire for a dismissal or boundary based on their instinct before he compulsorily goes to the third umpire to review his decision from various angles and slow motion. The soft signal can only be overturned if the third umpire has conclusive evidence against that decision. In the fourth T20I against England, Suryakumar Yadav was sent back to the pavilion by Sam Curran. The batsman tried to play a ramp shot but Dawid Malan ended up taking the catch. Replays indicated that the ball might have hit the ground when Malan was taking the catch, however, as the soft signal was out, the third umpire stayed with the on-field call citing “lack of conclusive evidence”. The soft signal is a barrier in conclusive decision making, umpires sanding close to the pitch can definitely not make these tight calls through the naked eye and since they have to go to the third umpire by compulsion there should be no need for a soft signal and it should purely be based on what the cameras show in slow motion.

According to me, umpires call and soft signal are two of the biggest hindrances in the modern day game and need to be disregarded as soon as possible, for a brighter future and to maintain fairness in the sport. When technology has advanced so much but we are still depending on human instinct, systems like the DRS seem like a sham and we may as well go back to the orthodox form of umpiring.